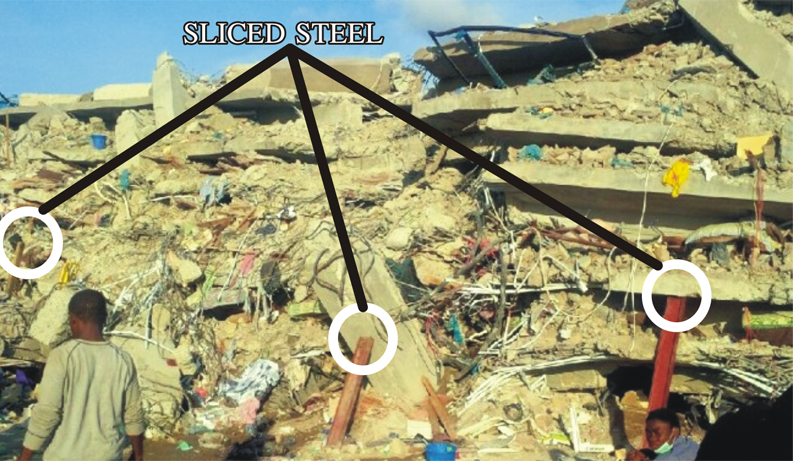 Shocking! The factors that led to the collapse of Prophet T.B. Joshua’s church that killed 116 people have been revealed by engineering experts.

At the ongoing court case regarding the tragic building incident at The Synagogue, Church Of All Nations (SCOAN) in Lagos, Nigeria on September 12th 2014, Professor Patrick Nwankwo made the shocking revelation.

In his conclusions that have been reported by several newspapers and media houses in Nigeria, Professor Nwankwo confirmed the ill-fated guesthouse was compliant with international standards, ruling out complicit as the cause behind the collapse.

While being led-in-evidence by the defence counsel, Olalekan Ojo (SAN), Nwankwo told the court that he visited the site, took measurements and carried out thorough investigations before concluding that that the collapse “had nothing to do with structural defects”.

Professor Nwankwo said a building with structural defects would fall partially or sink on one side, adding that warning signals such as cracks would be observed by occupants.

“It is not possible for it to collapse like a park of cards as seen in the case of Synagogue”, he insisted, referring to the manner in which the building imploded in a matter of seconds, as captured by the church’s CCTV.

Nwankwo tendered the report on his findings, accompanied by several volumes of ‘British Standard building codes of practice’ to support his assertions, as exhibits to the court.

Dr Jide Martin, the Director of Public Prosecution, raised no objection against the documents after examining them.

Professor Patrick’s conclusions mirror that of Dr Stephen Asheri Ntoga, a trained civil, structural and material engineer from Tanzania who equally examined the guesthouse within TB Joshua’s church complex and concluded structural or foundational failure could not have been responsible for its tragic collapse.

The Lagos State Government is suing The SCOAN over the collapsed building that led to the death of 116 people, including 85 South Africans.

There have been widespread rumors on the SCOAN building collapse details, much to the amazement of readers, especially on how the SCOAN stifled rescue operations and were uncooperative with rescue attempts. These rumors were hastily published by the Nigerian mainstream newspapers and even surprisingly the big players in the journalism domain like CNN, Aljazeera and the bbc.

Recently however, very contrary and contradicting reports to the former are coming up from the coroner’s inquest into the collapse that exposes the misrepresentation of the media and other lopsided journalists. Many thanks to Nosa Osazuwa, a writer from Lagos, present during the coroner’s inquest for adequately publishing the details of the proceedings at the inquest that is bringing these liars to the limelight. True to the words of TB Joshua in which he declared that NO MATTER HOW LONG A LIE IS SUSTAINED; TRUTH WILL SOMEDAY PREVAIL.

Here is a taste of the truth:

[Nosa Osazuwa reports ] Kaduna-based bomb expert, Mr Paul Iguniwei, who has also worked as a research officer with the Defense Ministry told the coroner that the building was targeted with an infrasonic weapon by the plane-like object that flew over it on four different occasions while maintaining the same flight path on the day of the unfortunate incident.

“From what I observed, the four-time movement of the aircraft over the building could have been deliberate and that was to release enough dosage of the infrasonic weapon capable of bringing the building down. If you would notice, after the fourth movement, the aircraft did not return and then, the building collapsed,” he told the court.

Mr. Iguniwei described the infrasonic sonar as being both invisible and inaudible but capable of causing serious damage if its intensity is pronounced. Mr paul Iguniwei said that his suspicions arose after he eliminated other possible theories due to lack of plausibility.

According to him, He also said he eliminated the theory of structural defect as a result of a weak foundation because even after the collapse, there was no sign of stress on the foundation which he observed still stands intact.

“Engineers generally believe that a structure would fail due to bad foundation and materials but if you go there to the collapse site now, the foundation pillars are still very intact. My position is that the building was weakened from the top”, the witness explained.

Meanwhile, the Chief Security Officer of The SCOAN, Sunday Okojie, played CCTV footage to the court showing scenes contrary to the sequence of events conveyed by the first respondents such as NEMA and LASEMA. According to him, LASEMA came to the scene of the incident on Friday, September 12, 2014 around 3:10pm without any equipment while NEMA arrived around 3:24 pm. The CCTV footage revealed that both agencies came ill-equipped and didn’t spend more than 30 seconds before being ushered to the scene of the collapsed building.

Additionally, throughout the rescue operation, they reported in the morning at 8am and left the scene by 5:30pm daily. When the SCOAN’s counsel, Olalekan Ojo, asked him about the allegations by both agencies that they came with several heavy equipments but were prevented from performing their statutory duties by the church, Okojie retorted, “They were lying to cover their inadequacies. Can a vehicle carry another vehicle inside because from the video before us, they only came with one vehicle that was even empty?

“Also, it’s so sad that they resumed work at 8am and closed by 5:30pm like office executives. The only thing they were interested in doing was talking to the media. They were busy organising press conferences and were unconcerned with the lives they came to rescue. I can tell you categorically that it was church officials and technicians who were drilling holes and bringing the victims out of the rubble.

“It’s a shame on our country because foreigners were on ground and witnessed how all these sad events evolved. It was even the church who initiated the issue of Julius Berger bringing heavy duty equipment and we have receipts here to prove that we procured all the equipments used in saving those innocent lives. Here are the receipts of all hospital bills and even government morgues where we footed all the bills. If it was the state government who rescued those lives, there won’t be need for state hospitals to issue receipts in our name.”

The state counsel said they were at a disadvantage due to the evidence presented by the witness and as such did not cross examine Okojie. He therefore requested for more time to watch the footage and fix a date later for cross examination, a request Magistrate Komolafe quickly accommodated.

IN A MORE RECENT REPORT:

Testifying before the court investigating the cause of the collapsed building belonging to the Synagogue Church of All Nations (SCOAN), Mrs Shoetan, who was present during the entirety of the rescue operation, expressed sadness that the statutory respondents had no idea how to handle the crisis at the site of the collapse.
“LASEMA, NEMA and my agency were overwhelmed such that it was the youths at The SCOAN who told us what to do and where to drill which helped rescue a large number of people alive,” she told the court presided over by Magistrate Oyetade Komolafe. “Even NEMA and LASEMA didn’t come with any heavy duty equipment; they were merely onlookers and spectators.

“They were busy chatting on social media. I was angry and have evidence when people cautioned them on Facebook during the rescue operation that instead of saving lives, they were busy posting pictures on the internet. While I was there, I didn’t leave for five days because of the gravity of things on ground but these people came and went daily. I am bold to say that they were confused and mere onlookers during the rescue operation.”

“The LASEMA General Manager, Dr Femi Osanyintola did not co-operate well with other responders and I kept telling him that. What he did most of the time was to hold meetings with his team from the state.

“The police I can confirm were present throughout the period of the rescue operation. No security agent ever stopped us from working and, to the best of my knowledge, nobody was assaulted.” Her testimony contradicted earlier claims from NEMA and LASEMA officials that they were prevented from gaining access to the site and treated aggressively by church staff.

Earlier, a witness who is one of the surviving volunteer workers of the church involved in the unfortunate incident, Afusat Oladipo, had told the coroner that moments prior to the collapse of the building, she had noticed a strange flash of light accompanied by a thunderous bang. Her account corroborates those of other witnesses who had previously spoken during the inquest. Their accounts all suggest the possibility of an explosion.