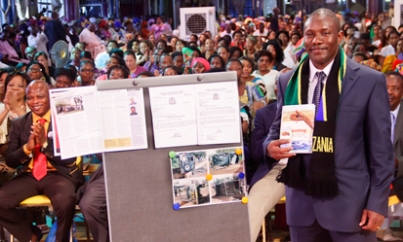 Mr Samuel Diah, a Tanzanian, came to The SCOAN with the problem of stagnation and business failure. He had occupied important positions at his work place and served in strategic capacities but he had nothing in terms of material wealth to show for his years of dedicated service. He had almost written himself off as a total failure. However, with the last ray of hope left in him, he decided to give God a chance to demonstrate His power over his life. He visited The SCOAN and received the Anointing Water and ministered it daily in Jesus’ name.

A month later, he received a call from the Ministry of National Tourism and Natural Resources notifying him that he had been elected as a director of the Tanzanian Tourist Board. He also gave another testimony of how God had saved him and his son from a ghastly road accident. That fateful day, before leaving his house, he ministered the Anointing Water as usual and drove his son to school. Along the way, the car swerved and somersaulted. People ran to see if there were any survivors in the car and miraculously, nothing happened to them. To God be the glory. He showed his appointment letters and photographs of the scene of the accident.

being conducted by the man of God, Prophet T.B Joshua. She cried out to draw attention to the fact that her paralyzed elderly mother was sitting in one of the overflow canopies in a wheelchair. When Prophet T.B. Joshua inquired what the matter was, the young lady said that her mother had been confined to the wheelchair for three years. She had been affected psychologically and was unable to perform her duties as a teacher. She had sought solution from several hospitals and referrals before it was suggested that she undergo an operation as that was the best the medics could do to save her life. As soon as Prophet T.B. Joshua prayed for the physically disabled woman, she rose from the wheelchair and walked in the midst of The SCOAN congregation for the first time in years. Glory be to the Master Healer – Jesus Christ!

The congregation couldn’t help but join the overwhelmed woman and her daughter in a victory dance that lasted a while, as people besieged the woman to give her heart-rending hugs.