Prophet T.B. Joshua stretched his hand and prayed with worshippers against ‘fleshly lusts, and ungodly thoughts and desires.’ He later on ministered prayer at The SCOAN Prayer Line where demons were cast out and healings declared in the mighty name of the Great Physician, Jesus Christ. 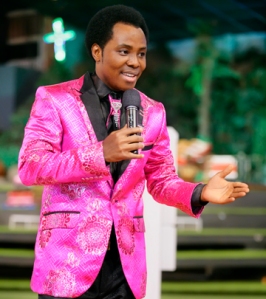 Earlier on, Wise Man Christopher delivered a powerful and enlightening message titled, “LIFE IS A LEARNING EXPERIENCE” whose proof text was drawn from Genesis 37:5-11,19-20; Genesis 39-45.The message centred on the need for Christians to begin to look at challenges as life’s lessons – a thing he said is made possible when one relies on the strength of Jesus Christ. Wise Man Christopher drew people’s attention to the Scripture of one of the greatest personalities of the Bible – Joseph, saying the hard times he went through in the dry pit, Potiphar’s house and in the prison, were God’s own way of preserving him for the glory ahead.
He said it was during the dark periods of his life that Joseph gained the necessary experience and maturity to handle the responsibilities imposed by the exalted position in the royal court in Egypt.

“If he had become the prime minister earlier than he did in Egypt, he would have been too inexperienced to handle the position. Ask any successful person in Christ Jesus and he will tell you how much humiliation, hardship, disappointment, disagreement, persecution and rejection he had to endure in order to come to a new level in life,” said Wise Man Christopher quoting the wise words of Prophet T.B Joshua who once said, ‘Successful people don’t just drift to the top; it takes focused action, personal discipline and a lot of energy everyday to make things happen’.

He therefore encouraged Christians to feel strong in challenges if things are to happen, believing that one’s personal improvement and fulfillment in life, comes through the continual process of learning from both positive and negative experiences. He also referred to 2 Corinthians 12:7-12. He said Apostle Paul’s thorns were meant to keep him humble; to keep him from becoming conceited and proud.

“That was God’s own way of expressing His unfailing love towards Apostle Paul by hiding pride from him. Wherever you are, whoever you are and whatever you are going through in life, no matter your physical ability, ethnicity, nationality, race, gender or status stay with one thought in mind, ‘You are loved by God,’” he said.

4 thoughts on ““LIFE IS A LEARNING EXPERIENCE” WISEMAN CHRISTOPHER”