Glory be to God. We are please announce out success in taking our first organised group to SCOAN Lagos and we would like to say that every member of the group has come back with breath taking testimonies. The first to share his testimony is Mr. Paul Collett.

My name is Paul Collett. I am 49 years old and from the UK. I am married and the father of four children whose ages range from 20 down to 13.

This was my fifth visit to the Synagogue Church of all Nations in Lagos Nigeria. My previous four visits had taken place in 2004, 2005, 2007 and 2008. All have had a life transforming impact upon me. On the first of my stays I had been freed from the impact of child sexual abuse and depression. This included being healed of a stutter.

On the service day on 25th August 2013 I was placed in the prayer line for warts, family curse and breakthrough. Concerning the warts: I had a veruca on the bottom of my left foot for over ten years. All suggested treatments had only succeeded in making this problem worse rather than better; I had started out with one veruca but these had multiplied to become four. This said I had not been to the Doctor concerning this problem, only the pharmacist. I could have lived with the warts. My major reason for travelling to Lagos was spiritual rather than medical.

For a long time I had been aware that I had an unhelpful spiritual inheritance from my father. He was a lovely man who had become a believer at the end of his life.  However, he had been a Freemason as his father had before him. He had also grown up in India, Egypt and China and had been impacted by idolatry in these lands. I had given my heart to Jesus Christ when I was 13. However, I had not begun to seek God until I was 19. Since reading Derek Prince’s  book “Blessings and Curses: You can choose!” when it was published in 1991 I had seen the negative consequences of Freemasonry. However, having prayed through the model prayer in that book I believed that a spirit had left me at that time. I was less sure how to deal the idolatry because to my mind not as easy to pin down.

I  concluded that I needed to come to SCOAN for deliverance. My basis for this was that despite having experienced many blessings in life I could make no financial progress and remained poor and in debt. I had been unemployed for a year from 2008 to 2009. I had taken out loans that I could not repay and had become reliant upon credit cards. This had caused my wife and children suffering. Despite having been employed and even promoted since that time our situation appeared to become worse rather than better. It often seemed that when I tried to think about finances it was as if a cloud of fear and paralysis settled upon me. It often seemed that I had made poor and foolish decisions over the years. My younger brother had also seen his business fail and gone bankrupt twice. 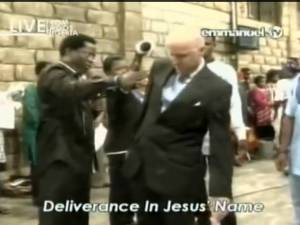 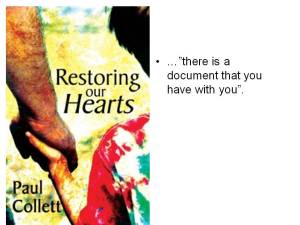 In the prayer line I had been prayed for a number of times when I was sat down in a chair and Wise man Racine began to pray with a real authority and effect. As he did so I came under the influence of the Holy Spirit and the wicked spirit began to manifest itself. It confessed that it was responsible for causing frustration and disappointment and had brought my family limitation and poverty. This had indeed entered through my family and my father and had been present from birth. It had robbed from my family. After a short struggle the spirit had to yield to the authority of the name of Jesus and depart. I got up from the floor finally free of this spiritual bondage that had lasted a life time. I was filled with joy and gratitude to God.

During the service we heard the word of God preached in power and there were so many amazing testimonies of God’s gracious intervention in the lives of his people that it seemed to exceed comprehension. When it seemed that I was already blessed beyond measure Prophet TB Joshua began to prophesy to me during the Prophecy time. The man of God said that he wanted to congratulate me for two things. First was concerning the life that I had been living. If it had not been for this they would have been looking at and pointing at my grave but you overcame that.  It was true that before I had ever come to SCOAN in 2001 I had been freed on  from a ‘spirit of death’ when I had been falling asleep whilst driving. I had identified that the entry route for this had been the rape that I had suffered as a three-year-old. I had been physically attacked on four occasions during the course of my work with the poor and had had to move house to escape a man who had threatened to kill me. However, the example that was upper most in my mind was in 2009 when I had been tried for my professional life when my enemies had tried to end my career and God had delivered me.

The other thing that the man of God wanted to congratulate me on was a document that I had in my possession. It occurred to me that the Holy Spirit was speaking through him about the book, “Resoring our Hearts” that I had written and published in the previous year.

These two words of congratulations and my earlier deliverance brought me great joy and pointed me to my future success. My past is over. Defeat and failure are things of the past. Our God is mighty to save.

Bless you and thank you all for everything.

9 thoughts on “God Delivered Me At SCOAN – Paul Collett’s Testiomony!”