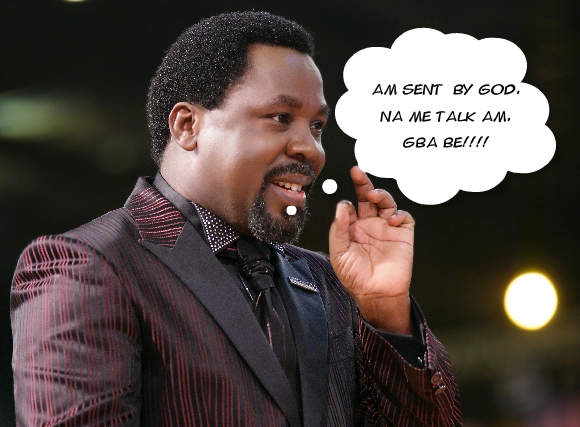 Has run out of ammunition hence, recycling and reposting old articles which we’ve already responded to. We are also reposting our response to their article here.

In view of the fact that so many people still seem to believe the liberal bias Journalism of BBC and SKY news on SCOAN, We’re making this post to revisit the issue and also as a Tribute to a regular commenter on TB Joshua watch who goes by the alias Ironclad, and works in an investigative/audit field involving white collar crime in the State of New Jersey, we with this post present collated excerpts from his comments throughout TB Joshua watch which are as insightful as they are revealing and are facts too important to be at the bottom of many comments on TB Joshua watch. Apart from exposing the hidden agenda behind the BBC and SKY news report on SCOAN, he also laments how too many cessationists would rather leave God in the fridge of their unbelief, with miracles abounding and the gifts of the Spirit shining in third world countries. 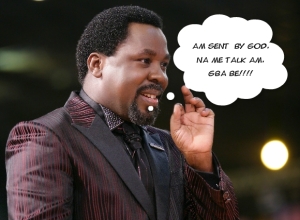 The BBC news report mentions a Jane Iwu (I don’t fail to notice the ‘Jane’ part of Doe) who “knows of a friend.” No name. No dates. There’s also mention of a “second woman from east London who told of a friend.” Notice, an unnamed woman tells of another unnamed woman. Both accounts are hearsay and thus not good admissible evidence. Where’s the third alleged victim? Can we really say with full confidence that these are worthy evidences to justify such a firm conclusion as the heading of the report proclaims? That’s misleading. Guilty until proven innocent is not a good Christian practice; but then again, who said these liberal news agencies are in favor of Christianity to begin with. News reporting should be more responsible than that. Maybe that’s why respectable news agencies like the AP have not picked up on it. We should not let bias blind us away from what is honest and true. If what they say is true, then the perpetrators are liable for manslaughter, at least? This indeed has all the trappings of an indictable offense. Have the police been conducting an investigation? Are there lawsuits pending? I know Great Britain has a very severe judicial system. And the President of Nigeria would not allow one of its citizens, whom he personally knows, to get away with this. It is not good for the nation or his political reputation. I don’t need to travel to a faraway country to realize that in every church and in every movement there will always be those who will stir the waters of controversy because of envy or because something that has been done against them. There will always be opponents. Such reality we also find in the Bible. Christian history is filled with it.

BBC report on SCOAN – based on “An unnamed woman’s testimony to another unnamed woman” – Faceless and nameless allegations offering nothing to track!

Let’s go back to that BBC report again. The report states: “AHPN said it believed the Synagogue Church Of All Nations (SCOAN), which has UK headquarters in Southwark, south London, MAY BE one of those involved in such practices.” (Note the capitals) According to the above, they don’t even know if SCOAN is implicated. The mindtry MAY BE involved in the practice. So much for nothing. No wonder none of the leaders have been indicted or investigated by police. Look who the churches in Britain are dealing with in this controversy. A closer look at one of the accusers >>> “Emmanuel admitted he suspects he may have passed HIV onto his boyfriend” {http://news.sky.com/home/uk-news/article/16117269}. Talk about not changing your lifestyle and repenting from your sin of homosexuality and yet wanting God to heal you. Since in the Western world AIDS still attacks gays disproportionately, of course it is not a long jump to conclude that some in the gay community will have their radars open and their claws ready for tearing its prey with on this one. After all, ILGA and similar LGBT groups are increasing their efforts to bring down all things religious and if it could, destroy Christianity itself, the vanguard of so-called hostilities against them. Funny that many professed Christians are joining their efforts as the Devil pounces on. We cannot deny the fact that AIDS disproportionately affects gays in western countries. And we cannot pretend that there is not a homosexual agenda out there looking to destroy the church, or at least that sector of Christianity that disagrees with their lifestyle and calls it a sin. Have you been aware of the latest activities of the pro-gay movement in its attempt of dismantling established Christian traditions and values? We have one of the accusers, Emmanuel, in the Sky News report, who’s complaining that he might have given the virus to his boyfriend after, presumably, thinking that he was already healed. What??!! That sounds so preposterous and disingenuous. The gall of this man!! Instead of changing his sinful ways and turning back from the sin of homosexual sex, this malcontent has the audacity to point fingers at God and his servants for not having his miracle as was promised so that he could go ahead and keep on enjoying his sodomizing escapades. This is bad enough in itself, but what worries me more is that here we have a group of co-called Christians joining hands with these unrepentant sinners, even with a liberally slanted media, and following the Serpent’s tail without so much looking at the destructive path the filthy animal is leading it to.

Abuse Allegations against TB Joshua – Where Are The Proofs? – or at least News Reports?

Satan remains the accuser of the brethren, working through his agents to accuse God’s servants.

And about allegations of sex abuse coming from Nigeria, if this is also true, where are the news articles for these also? If a minister is suspected of having committed so serious a crime as sexual abuse, don’t you think the authorities would be on top of this as well as the respective news organizations? respectable news agencies like the Associated Press Especially when SCOAN has as one of its members the President of a nation? News agencies will stop at nothing to cover such juicy sensational stories. But that’s not what we have because it’s just that. Faceless and nameless allegations offering nothing to track. And one more thing about the BBC report. The two anonymous accusers don’t even make a connection with SCOAN. They only say that some pastor or some church had told victims not to take medication. This is the classic guilt by association ploy. I’m not saying the BBC is not credible. What I had problems with was the story of the people making the news. It did not add up and was kind of flaky. To their credit, the BBC journalist did write: “AHPN said it believed the Synagogue Church Of All Nations (SCOAN), which has UK headquarters in Southwark, south London, MAY BE one of those involved in such practices.” A good way of not putting yourself in the hook. Pretty slick! So don’t let my skepticism of people’s shaky stories stop you from posting relevant news articles, After all, you are compelled to save the world from awful Antichrists like TB Joshua. In that spirit, where are the articles pointing to SCOAN’s sexual abuse allegations? I’m sure with potential crimes like these, it would not be hard to find a juicy story or two, especially when you have hundreds, if not thousands of people out there who are being robbed and abused by Joshua’s ministry and are out to get him.

Why So Much Criticisms against TB Joshua’s Ministry?

Heresy hunters have been at it for centuries. This is nothing new. Just look at Christian history. Mention Irvington or Kuhlman, for example, and all cessationists and anti-charismatics will come out of the woodwork with nooses and stakes. To cessationists and anti-charismatics, revelatory and other supernatural gifts are just not possible, so if you have them, that automatically qualifies you as a false prophet. Notice how they make much of the 1 John 4:1-3 test, but yet fail to heed its pure wisdom. On this score, TB Joshua passes the test since he acknowledges that Jesus Christ has come in the flesh and is from God. But that’s not enough to the cessationists. To him, extraordinary displays of supernatural power and revelation makes you an antichrist. Such views operate from an a priori thinking, and it is therefore natural that the charismatically gifted should send them fear because it is a violation of their theological sensibilities.

*Cessationism: In Christian theology, is the view that the miraculous gifts of the Holy Spirit, such as tongues, prophecy and healing, ceased being practiced early on in Church history.

9 thoughts on “TB Joshua’s Enemies Runs Out of Ammunitions”