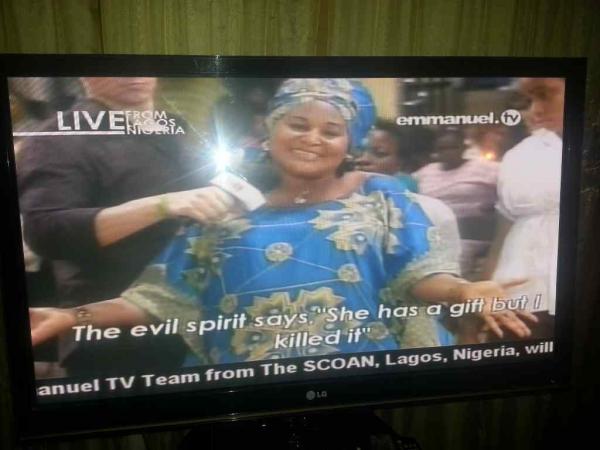 Nollywood veteran actress, Camilla Mberekpe, popularly known as Mama Eko, was at the Synagogue Church of All Nations, SCOAN, on Sunday to seek deliverance from a demon that has possessed and tormented her for many years.

As the face of the light-skinned actress was beamed on television screens in Prophet T.B. Joshua’s church, many worshippers stood in awe and screamed: “Jesus, an actress too!”

Prophet T.B. Joshua, who did not seem to know the actress, was a bit confused and did not understand why the sudden noise in the church as he stood before her.

“I don’t know you,” he said as he laid hands on her. He asked her to wait behind for the exorcism in the night.

The church and deliverance service was broadcast live to millions of viewers on Emmanuel Television, the Synagogue Church’s cable network aired on several continents.

Later in the night, one of the wise men in Synagogue church began to exorcise the demons from the actress and in the process, she began to talk, although the exorcist later said it was the demon in her talking through her.

She began to confess that her mission is to destroy a very good actress who prays and worships God a lot.

“I don’t want her to go up. She’s a very good actress. I want to destroy her,” she said in a bizarre and demonic tone.

“I destroyed her marriage because she refused to worship me. I hate it when she prays. She is a prayer warrior,” she said.

As hands were laid on the actress and the demon was ordered in the name of Jesus to leave her body, she fell to the ground.

Her scarf fell off her hair and she began to roll on the floor, screaming and apparently resisting the power of God.

The scene appeared bizarre to many worshippers and could shock millions of viewers not used to occultic or spiritual warfare.

At a time, it seemed as if the actress, who has acted in more than 38 home video movies, including many roles as wicked mother and step-mother, was in a Nollywood scene and acting.

The expression on her face appeared funny, serious and dangerous.

Ngozi Mberekpe is a very versatile actress who speaks English and French fluently as well as her Igbo native language.

She has been in Nollywood since the early days of the industry and she is often cast as  mother or wicked step-mother.

Another plus for Camilla is the fact that she is also fluent in French, as demonstrated in the movie “Bonjour”.

She has featured in numerous roles in movies such as Tea or Coffee, Holy Anger, Illegal Brother, Sins Of the Heart and  Beloved among others.

The deliverance session was so striking that the four buses purchased by Synagogue Church to cater for the elderly in their church, which was introduced yesterday, received little attention after the service as many people kept talking about the Nollywood actress.

The four buses, T.B. Joshua said, would convey the elderly to church on Sunday and take them back home after the service.

“If you want to reach old age, you must care for the elderly,” T.B. Joshua said in her sermon, adding that many have abandoned their aged parents and grandparents in villages and are enjoying life alone in Lagos.