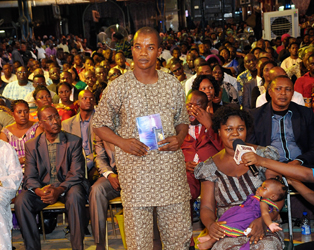 They came to The SCOAN in August and saw how people had received their healings through the medium of the Anointing Water. They were opportuned to get the Anointing Water and after prayer and ministration, his wife became pregnant that same month. Before then, they had visited many hospitals, spiritualists and pastors for solution but weren’t successful. Today, the couple is blessed with a baby girl. His wife confirmed how she saw the prophet praying for her and her child in her dreams on several occasions throughout her pregnancy. Mr Mayomi advised people to always believe in God and trust in Him.

The SCOAN Live Sunday Service witnessed huge attendance by worshippers from all over the world. Hundreds of people came out to testify to the goodness of God upon their lives.

He recalled the genesis of his wife’s mental ordeal and said that no one could identify the cause of the problem. He observed the sudden abnormality in his wife’s behavior once when he visited her shop. She broke glasses, bit him and displayed a high level of aggression. She had to be rushed to the psychiatric centre where she was diagnosed with a mental disorder. Despite the series of injections given to her for four days to calm her down, the dementia remained. Mr Kadiri said that he then remembered the great works of God in The SCOAN, particularly how God was transforming the lives of people suffering from different health challenges through the mediums of Prophet T.B. Joshua, the Wise Men and the Anointing Water. He decided to visit The SCOAN for solution. 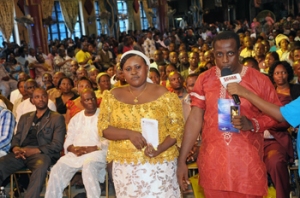 He received the Anointing Water, read the testimonies in the Anointing Water booklet, prayed and ministered it to his wife. Immediately, she fell asleep and when she woke up, she requested for food – a tacit attestation to her mental normalcy. He said that when they returned to see the doctors at the psychiatric centre, they showed bewildered expressions on their faces and asked of where they could also get the Anointing Water. He presented a certified medical report which showed that his wife was now completely normal. Asked to comment on her healing, Mrs Deborah Kadiri said she couldn’t understand what happened to her but found herself at the psychiatric hospital with water on her face. She said that when she slept, she saw Prophet T.B. Joshua in her dream and he said, “My daughter, you will not suffer. It is over”. She said that it was later that she found out that the water on her face was the Anointing Water. She advised people to always have faith in God.

Mr Raphael Kpogli from Ghana had been a drug seller, smoker and addict for some 30 years, dealing specifically in heroin, Indian hemp (marijuana) and cocaine, while living a life of recklessness, waste and violence. In a shocking account of the debilitating and destiny-decaying effects of drug addiction, he narrated his sordid life experiences. He literally had to smoke a ‘cocktail’ of these drugs before going to bed, talking communicably with people or even eating, his wife and children always afraid of him at home due to his erratic nature. Having travelled to over six countries as a drug dealer, he acknowledged that although he never used a gun, he had caused multiple deaths by introducing drugs to people. His insatiable lust for this ‘cocktail’ of chaos crippled him financially as he sold cars, properties and even stole his wife’s clothes and jewelleries to sell to pay for his indulgence. A once thriving and intelligent man was reduced to a nervous and hate-filled wreck, staying in a single room in a house for months on end and only emerging to purchase more of the poison that was slowly crippling and killing him.

However, his wife, whom never doubted that one day God would turn her husband around, kept praying for his life to change and stood by him through thick and thin. When a few drops at the bottom of a bottle of Anointing Water were given to the Kpogli’s, Mr Raphael had no idea that within them contained the freedom he so sorely needed. After ministering the Anointing Water, Mr Kpogli said he felt a cold sensation envelop his body, as if a wave of liquid love was cascading through his entire system and reverberating within to eject all dependency on drugs and the darkness that embodied them. Mr Kpogli, who was about to embark on a rare journey to Accra, was worried at how he would complete the journey without taking the drugs. However, after many hours of travelling without even a thought of the substance, he realised that all previous craving for the drugs had disappeared. He tucked into a hearty meal and completed it, the first meal he had finished without taking drugs in 30 years. After three weeks of a drug-free life, he travelled to The SCOAN to share this life-changing testimony, exhorting friends who were still in the same business to abandon a life fuelled and filled by drugs which had reduced most of them to criminality. He said people must depend on God to be released from their plagues and a life of uncertainty.

James Mangiza couldn’t live without smoking. From the tender age of 12, the young South African literally lived in a state of dependency upon cigarettes and a drug he called ‘dagga’, popularly known as marijuana. It had been 20 years of addiction, consuming both time and finances as well as causing his health to spiral steadily downwards. However one day while James was watching Emmanuel TV with his family, Prophet T.B. Joshua began to pray for viewers around the world. It turned out to be a day he would ever remember, a day of radical change.

“I would like to express my gratitude to God for one of the greatest miracles which happened in my life through watching Emmanuel TV. I have been smoking cigarettes and ‘dagga’ since the age of 12 and I am now 32. I would smoke it before and after school every day. I became so addicted as I grew up that I wouldn’t do anything without fist smoking ‘dagga’ and cigarettes. Per day I would smoke ‘dagga’ 5 to 10 times and at least 20 cigarettes. I started watching Emmanuel TV with my family at the end of last year. In March this year (2011), I heard Prophet T.B. Joshua saying the viewers at home should touch the screen and that distance is not a barrier. I touched the screen as he prayed. The next morning when I tried to smoke a normal cigarette I felt like I was taking a paralyzing drug. I just couldn’t smoke it. I waited a few minutes, lit another one and this time nearly fell to the ground as I tried to smoke. From that day until now, it has been three months and I have never touched cigarettes or ‘dagga’. I am completely delivered from that spirit of smoking! Emmanuel! Thank You, Jesus!”

SOURCE: Distance Is Not A Barrier

The Sunday Service kicked off with amazing illustrations of God’s mercy as numerous people received their healing and deliverance at The SCOAN Prayer Line. A million thanks are not enough to Jesus Christ for the miraculous testimonies that follow:

He had suffered from diabetes for three years and had used both orthodox and unorthodox medicine, none of which

cured the disease. His health condition became worse as reflected in the following symptoms: persistent urination (25 times before dawn), loss of weight, mental imbalance and high sugar level of 680mmol. He said he came to The SCOAN and was opportuned to receive the Anointing Water. He ministered it after he had prayed and read the testimonies in the Anointing Water Booklet. Astonishingly, his high sugar level dropped from 680mmol to 78mmol, signifying a miraculously high reduction rate. Feeling that he no longer needed to regulate his blood sugar, he went to consult his doctor. The doctor tested him again and the result revealed that his sugar level was at 6.2mmol – clear evidence that he no longer had diabetes. He advised that people should look unto God when they are sick. His wife, Azeez Mudi also confirmed his health ordeal, particularly his frequent urination and loss of weight which orchestrated persistent visitation to hospitals and herbal homes. She advised wives to help their husbands trust in God in hours of need.